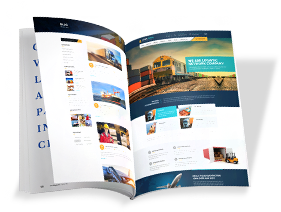 Transport modes are the means by which passengers and freight achieve mobility. They are mobile transport assets and fall into one of three basic types, depending on over what surface they travel; land (road, rail and pipelines), water (shipping), and air.

Passengers and freight are increasingly divergent activities as they reflect different transportation markets. In several modes and across many regions passenger and freight transport is being unbundled.

- Shipping
Mention has been made already how in the maritime sector passenger services have become separated from freight operations. The exception being ferry services where the use of RORO ships on high frequency services adapt to the needs of both passenger and freight market segments. Deep sea passenger travel is now dominated by cruise shipping which has no freight-handling capabilities, and bulk and general cargo ships rarely have an interest or the ability to transport passengers.

- Rail
Most rail systems improved passenger and freight services. Where both segments are maintained the railways give priority to passengers, since rail persists as the dominant mode for inter-city transport in India, China and much of the developing world. In Europe the national rail systems and various levels of government have prioritized passenger service as a means of checking the growth of the automobile. Significant investments have occurred in improving the comfort of trains and in passenger rail stations, but most notable have been the upgrading of track and equipment in order to achieve higher operational speeds. Freight transport has tended to lose out because of the emphasis on passengers since such systems were optimized for passenger flows. Because of their lower operational speeds, freight trains are frequently excluded from day-time slots, when passenger trains are most in demand. Overnight journeys may not meet the needs of freight customers. This incompatibility is a factor in the loss of freight business by most rail systems still trying to operate both freight and passenger operations.
It is in North America where the separation between freight and passenger rail business is the most extensive. The private railway companies could not compete against the automobile and airline industry for passenger traffic, and consequently withdrew from the passenger business in the 1970s. They were left to operate a freight only system, which has generally been successful, especially with the introduction of intermodality. The passenger business has been taken over by public agencies, AMTRAK in the US, and VIA Rail in Canada. Both are struggling to survive. A major problem is that they have to lease trackage from the freight railways, and thus slower freight trains have priority.

- Roads
Freight and passenger vehicles still share the roads. The growth of freight traffic is increasing road congestion and in many cities concerns are being raised about the presence of trucks. Already, restrictions are in place on truck dimensions and weights in certain parts of cities, and there are growing pressures to limiting truck access to non-daylight hours. Certain highways exclude truck traffic – the parkways in the US for example. These are examples of what is likely to become a growing trend; the need to separate truck from passenger vehicle traffic. Facing chronic congestion around the access points to the port of Rotterdam and at the freight terminals at Schiphol airport, Dutch engineers have worked on feasibility studies of developing separate underground road networks for freight vehicles.

- Air transport
Air transport is the mode where freight and passengers are most integrated. Yet even here a divergence is being noted. The growth of all-freight airlines and the freight-only planes operated by some of the major carriers, such as Singapore Airlines, are heralding a trend. The interests of the shippers, including the timing of the shipments and the destinations, are sometimes better served than in passenger aircraft. The divergence between passengers and freight is also being accentuated by the growing importance of charter and “low-cost” carriers. Their interest in freight is very limited, especially when their business is oriented towards tourism, since tourist destinations tend to be lean freight generating locations.

another key point is that Ata Tarabar Atlas Traffic Shipments can help your company to put it another way.

as shown above Ata Tarabar Traffic Shipments Help Your Company.

Contact us now to get quote for all your global
shipping and cargo need.